What they are saying about: Last Boat out of Shanghai: The Epic Story of the Chinese who Fled Mao’s Revolution 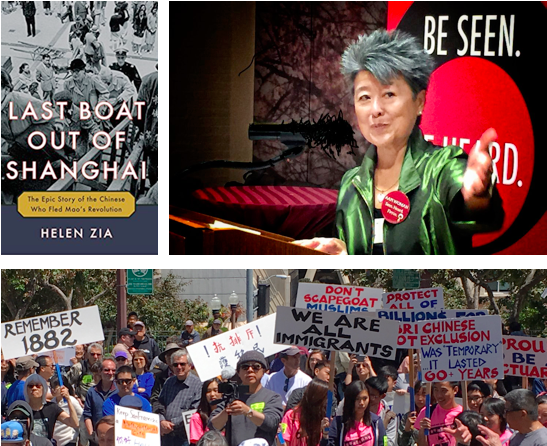 Robin Morgan interviews Helen Zia about her book and relevance to today’s events.  Listen on the WMC website.

A very informative interview with Helen Zia about her new book, Last Boat Out of Shanghai, by Rachel Myrow on San Francisco’s KQED radio program.  Listen on the KQED website.

An interview with Helen Zia about her new book, Last Boat Out of Shanghai, by Thuy Vu on San Francisco’s KQED television program.  Watch the interview here.

“Last Boat Out of Shanghai” is so good I’ll certainly need to add it the syllabus for my class. That means something else will have to go—or my students will simply have 400 more pages of fascinating reading.

–Mr. Wasserstrom is the co-author of “China in the 21st Century: What Everyone Needs to Know,” an updated third edition of which was published last year.

“Even more salient is the fact, or a surprise, that one of the four protagonists turns out to be the author’s mother, who has for years buried a secret in her own heart. This personal connection, adding an extra layer of emotional poignancy to the book, makes “Last Boat Out of Shanghai” a fascinating read as an intimate family memoir, as well as a missing chapter of modern history finally coming to light.”

–Yunte Huang is a professor of English at Lingnan University in Hong Kong and UC Santa Barbara. His most recent book is “Inseparable: The Original Siamese Twins and Their Rendezvous With American History.” Email: books@sfchronicle.com

As the child of two refugees, Helen Zia can speak to the effects of displacement, separation, and the personal costs of survival, adaptation, and reinvention. As an advocate for Asian-American and other minority communities, for women’s rights, and for LGBT rights, Zia turns inward in her newest book….

Stories of courage and resilience emerge from decades of oppression.

On May 25, 1949, the People’s Liberation Army marched into Shanghai, completing Mao’s victorious takeover of China. Coinciding with the 70th anniversary of that revolution, Chinese-American journalist Zia (Asian American Dreams: The Emergence of an American People, 2000, etc.), former executive editor of Ms. magazine, vividly chronicles the lives of several individuals caught in the violent “tsunami of revolution” in China’s “biggest, most glamorous, and most notorious city,” the port where throngs of Chinese rushed to escape…..

An absorbing history of a refugee crisis that mirrors current events.

I have long been an admirer of Helen Zia’s writing and scholarship, but Last Boat Out of Shanghai is at a whole new level.  It’s a true page-turner.  Zia has proven once again that history is something that happens to real people. I stayed up late reading night after night, because I wanted to know what would happen to Benny, Ho, Bing, Annuo, and their friends and families, when an action that on the surface looks good one can send you down a disastrous path, while sometimes a mistake can bring triumph.  These are choices that refugees around the world continue to make, which makes helps to make this book relevant in addition to being such a compelling good read.

James Bradley, bestselling author of Flags of Our Fathers and The China Mirage:

Gish Jen, author of the acclaimed, Girl in the Baggage Claim: Explaining the East-West Culture Gap:

Gripping, magisterial, ambitious, and intimate, Last Boat Out of Shanghai not only depicts a cataclysmic century as it was lived and felt by four very different people, it keeps you on the edge of your seat the whole way. What a tour de force! I could not put it down.

Last Boat Out of Shanghai is an impeccably researched and beautifully crafted account of the dramatic events surrounding the Communist takeover of China’s largest and most cosmopolitan city.  Tracing the fate of four fascinating families, Helen Zia offers a warmly human perspective on one of the most wrenching political transitions of the twentieth century.  This book is a genuine pleasure to read, with much to inform and interest the general public and China specialists alike.

Much has been written by and about the diaspora from war-ravaged Europe during World War II to make new lives for themselves far from home, but accounts of those who fled China’s postwar turbulence are rare. Helen Zia remedies this lack in a book that makes the experience of those who fled Asia’s most vibrant city both accessible and emotionally compelling. Last Boat Out of Shanghai deftly weaves together the stories of Chinese displaced by political turmoil into a mosaic that celebrates human determination, resilience and ingenuity.

Amy Tan, bestselling author of The Joy Luck Club and her most recent novel,The Valley of Amazement:

In Last Boat out of Shanghai,  Helen Zia provides the wide lens of history and an intimate focus on four young individuals facing the personal torment of leaving China, as well as family members.  Meticulously researched with a scholar’s acumen, the pages unfold with the harrowing suspense of a novel.  Zia’s portraits are compassionate and heartbreaking, and they are, ultimately, the universal story of many families who leave their homeland as refugees and find less than welcoming circumstances on the other side.  I read with a personal hunger to know the political and personal exigencies that led to those “now or never” decisions, for they mirror the story of my own mother, who left on virtually the last boat out of Shanghai.

War, foreign occupation, revolution, counter-revolution, exile, and new lives:  the worst and best of times of a remarkable population from China.  Helen Zia tells their stories with clarity, understanding and empathy.  Unforgettable and moving!

I am so thankful to everyone who has taken the time to read my book and offer their critiques.

More reviews on the way, please check back!