My Country Versus Me 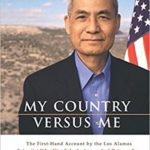 My Country Versus Me: The First-Hand Account by the Los Alamos Scientist Who Was Falsely Accused of Being a Spy

On the last day that I was shackled and chained, the chief judge of the United States District Court for the District of New Mexico apologized to me.

After 278 days of solitary confinement without benefit of a trial, on September 13, 2000, I was finally being freed. I had spent the previous winter, spring, and summer in “pretrial detention,” the government’s impersonal way of saying that I was such a menace to society that I should be jailed even though I was presumed to be innocent. The terrible offense I was suspected of committing: the high crime of espionage. I was not officially charged with spying, but my accusers spoke through government leaks and innuendo in the media and in Congressional hearings. According to the government officials who hoped to imprison me for life — from members of the President’s Cabinet and Congress to local prosecutors — I was so dangerous that I had to be locked away under the most severe conditions they could devise.

Judge James Parker, the federal judge who presided over my “theft” of the “crown jewels” — our most critical nuclear secrets — said in his deep and authoritative voice, with America as his audience: “I have been misled by our government.”

I remember that as I stood before him and the hushed crowd of family, friends, court watchers, and reporters, I noticed how brilliant the New Mexico sun was, streaming through the high windows of the Rio Grande courtroom at the federal courthouse in Albuquerque.

Judge Parker reviewed the terms of my release under a plea bargain agreement. I pled guilty to one of the 59 counts the government brought against me: I said that I had used an unsecure computer in the Theoretical Division of the Los Alamos National Laboratory to download national defense information onto a tape, which I retained. In exchange for my plea, all other 58 counts were dismissed — including the 39 counts that each carried a life sentence for violating the Atomic Energy Act and for stealing nuclear secrets with the intent to harm my country. My sentence in exchange for the plea: 278 days in prison, the exact time I had already served.

Then, in his calm baritone voice, Judge Parker spoke to me slowly and deliberately. Throughout the many court hearings, his faint Texas drawl had always reminded me of my graduate-school days at Texas A&M, and on this day it filled the huge courtroom:

I believe you were terribly wronged by being held in custody pretrial in the Santa Fe County Detention Center under demeaning, unnecessarily punitive conditions. I am truly sorry that I was led by our executive branch of government to order your detention last December.

Dr. Lee, I tell you with great sadness that I feel I was led astray last December by the executive branch of our government through its Department of Justice, by its Federal Bureau of Investigation, and by its United States attorney for the district of New Mexico, who held the office at that time.

I could feel a stifled gasp from the packed gallery behind me, followed by complete silence. I wasn’t sure if I was really comprehending judge Parker’s sincere words, so I glanced at my lawyers, Mark Holscher and John Cline, who stood on either side of me. Throughout the toughest moments of my case, when the power and might of the federal government seemed overwhelming, Mark and John and the other lawyers who defended me were as steady as the Jemez mountains. But now Mark was tilting his Boy-Scout-looking face just a bit, and though John’s tall frame hovered nearly a foot over mine, I noticed that one of his eyebrows lifted by a fraction.

News reports say that judge Parker spoke for another thirty minutes as he explained the reasons for his apology. To me, his words were a surprising but welcome end to these most horrible two years of my life. I could see the blue sky and bright sunlight from the courtroom, but as a prisoner I had rarely been out in the fresh New Mexico air, and I so missed fishing and hiking in the desert wilderness. During the whole of this year, my main “outdoor” experiences took place on court appearance days. That’s when my armed escort of federal marshals picked me up from the Santa Fe jail in the early morning light to drive me the 60 miles to Albuquerque, right past some of the places I fished and hiked. I had a friendly, conversational relationship with several marshals because we spent so many hours riding in a car together on Interstate 25. Still, it was hard to forget that they carried not only the keys to my wrist and ankle shackles, but loaded handguns and an automatic rifle as well, ready to shoot me in case my dangerous spy nature emerged.

One thing I did know, more than anyone else, was that the judge and the nation were indeed terribly misled. I knew — and the other nuclear weapons scientists who watched this elaborate show knew — that the “nuclear secrets” I was falsely accused of stealing were not really secrets but were available in the open literature. Also, the files I had downloaded as part of my job as a nuclear code developer were not the state-of-the-art weapons codes that the government wanted everyone to believe. Euphemistically known as “legacy codes,” they were in fact far older, more decrepit, and more flawed than the space station Mir. Had we gone to trial, these were points my attorneys would have argued. In his remarks to me, Judge Parker noted that he had seen evidence that my attorneys had not yet received — evidence that would be helpful to my case if we had gone to trial instead of taking a plea. I felt certain that I would be proven innocent if we went to trial. But that process would take many more months and cost hundreds of thousands — even millions — more dollars in additional legal expenses. The strain on my family was already too great. When the attorneys reached an acceptable plea agreement, I took it.

I have no idea how long Judge Parker actually spoke, because the moment took on a slow-motion quality in my mind. As he explained what happened in his court, it seemed that the judge was trying to make some sense of this ordeal for me, for the public, and perhaps for himself. He talked about the laws of this country that protect people from being jailed until there is a trial and a conviction — and how the accused are denied bail only in exceptional circumstances. One by one, he referred to Janet Reno, Bill Richardson, and even Bill Clinton and Al Gore as the parties in the executive branch who were responsible for the deception that led to my imprisonment. He didn’t list them by name, but by title: the United States Attorney General, the Secretary of the Department of Energy, the President, and the Vice President.

Judge Parker also cited John Kelly, referring to him as “the former United States Attorney of the New Mexico District, who vigorously insisted that you had to be kept in jail under extreme restrictions because your release pretrial would pose a grave threat to our nation’s security.” John Kelly most certainly made me out to be a monster — I will never forget those days in court. Kelly started his prosecution of me like a vicious attack dog, and then quit his job as U.S. attorney in order to run for Congress. Maybe I was meant to be the high-profile case that would boost his campaign, but he lost the election anyway. His deputy, Robert Gorence, the son-in-law of U.S. senator Pete Domenici, enthusiastically took up where Kelly left off. Then Gorence had to step down from prosecuting me.

Some journalists reported that a personal indiscretion led to Gorence’s demotion. I don’t care to discuss this in my book, but there has been plenty of self-righteous hypocrisy thrown at me, from inside the courthouse and inside the Washington Beltway, by those who would condemn me, no matter what the facts showed, for a capital crime that I didn’t commit. Gorence and Kelly had ordered the shackles and chains, the solitary confinement, and the other treatment I received in jail with the full knowledge and approval of Janet Reno, FBI director Louis Freeh, Bill Richardson, and, most likely, the White House.

Excerpted from My Country Versus Me by Wen Ho Lee. Copyright © 2002 by Wen Ho Lee. All rights reserved. No part of this excerpt may be reproduced or reprinted without permission in writing from the publisher.

Join me in hearing these strong Asian American Sis

R. I. P. SHARE THEIR NAMES STAND AND RESIST. D